MEO Volunteers and Benefactor of the Year 2022 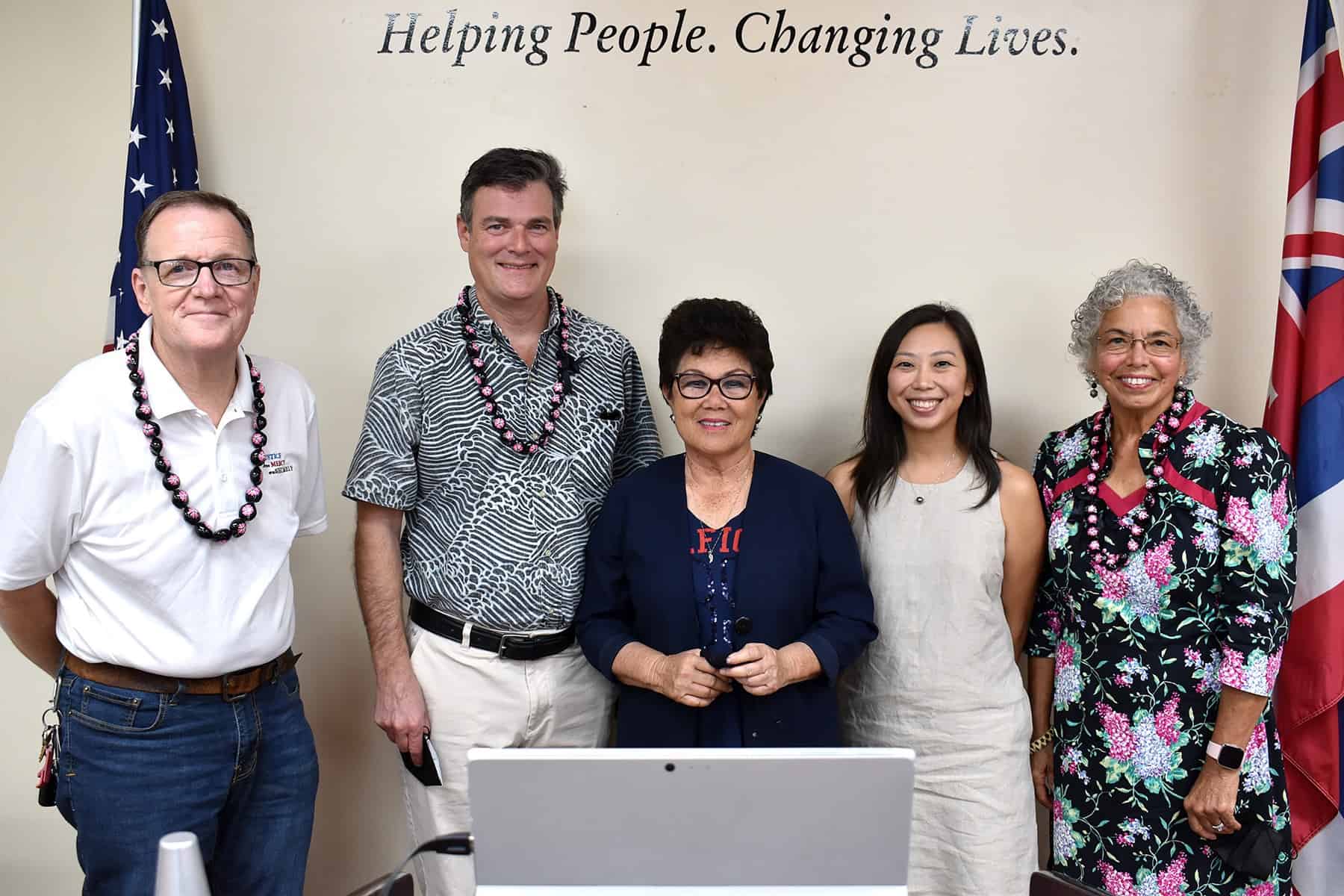 *Henrietta Chong, Peter Horovitz are MEO Volunteers of the Yea; AT&T is Benefactor of the Year*

AT&T was honored as Benefactor of the Year for $17,000 in donations that helped MEO maintain and make repairs to its Moloka‘i branch.

About 60 volunteers, staff, board members and government and business officials attended the in-person gathering at MEO with others viewing via livestream.

Nominated by the Early Childhood Services department, Chong has led the parishioners of the three churches of Kula Catholic Community in providing Thanksgiving meals and Christmas gifts to Head Start families in need for the last 15 years. Last year, she assembled food boxes for 12 families at Thanksgiving and two Christmas gifts each – a need and a want — for 100 individuals affiliated with the Head Start preschool program.

The MEO project is one of 20 supported by the parishioners of Our Lady Queen of Angels, Holy Ghost Mission and St. James Mission. Chong said she has been a regular attendee of MEO’s Volunteer Luncheon and never dreamed of being selected as Volunteer of the Year among corporations and companies.

“We are small potatoes, but God likes small potatoes,” Chong told the gathering. “The important message would be . . . you don’t have to belong to a corporation or a company to do good things, to make a difference in people’s lives. It starts with you. It starts from here (your heart), a desire to help others.”

Horovitz is the principal in the law firm of Merchant Horovitz and has been a member of the MEO Board since 2016, representing the Maui Bar Association. His expertise and experience in land-use/property issues have been valuable to MEO, especially in a land dispute and lease recording matter. He has saved the agency more than $20,000 in legal fees.

In accepting the award, he noted starting off on the board’s Program & Evaluation Committee, which reviews all agency programs. He called the introduction “absolutely eye-opening.”

“What I truly knew about MEO was the buses and to see the hundreds of programs and the thousands of people the organization touches . . . how could you not want to support an organization like this,” he said.

Horovitz and Chong were chosen from a group of nominees by MEO departments. The other nominees included:

AT&T’s support to MEO has grown over the last three years to $10,000 in 2021. MEO was able to install new doors, including an exit door with a push bar, treat the facility for ground termites, trim trees and perform other maintenance work.

In Hawaii, AT&T and its foundation and employees have donated about a half million dollars in recent years with employees putting in more than a thousand hours of personal time to community causes annually.

Elizabeth Songvilay, representing AT&T, lauded the “breadth” of MEO’s reach on the three islands of Maui County. “To be a small part of the great and intangible impact you have is just such an honor,” she said.

Melissa Unemori Hampe, a partner in Skog Rasmussen, was the keynote speaker and talked about the value of volunteerism while making a comparison to family. Volunteerism involves having the time, making the effort to think of someone other than one’s self, and finding reward in the endeavor. Hampe provides grant services and government relations, especially on Capitol Hill, to MEO. 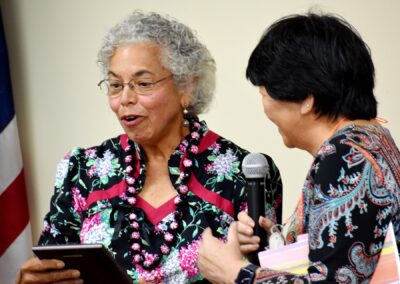 Henrietta Chong of Kula Catholic Community receives her plaque as MEO Volunteer of the Year by MEO Gay Sibonga. 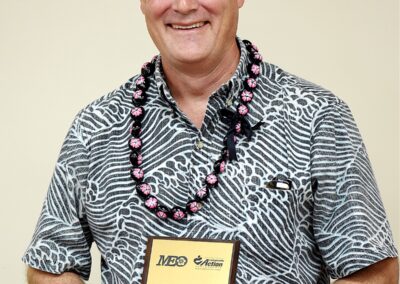 MEO Board Member and local attorney Peter Horovitz was named Volunteer of the Year. 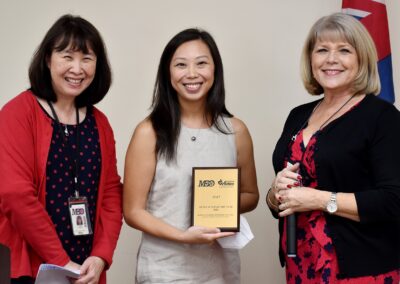 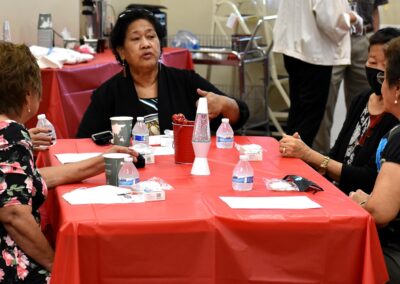 Council Member and MEO Board Member Tasha Kama converses with others at her table. 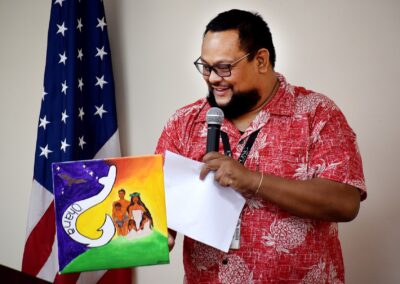 MEO Director of Youth Services Dane Ka‘ae holds up a piece of art created by a youth in an art party run by volunteer artist Tim Terry. 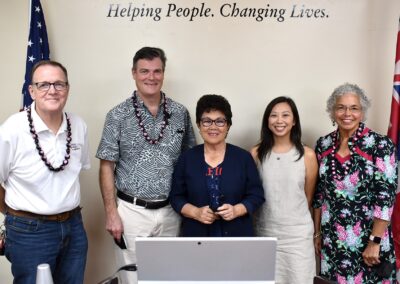 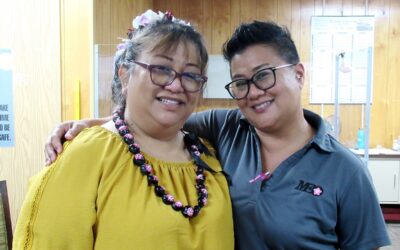 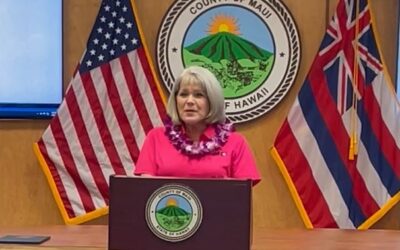