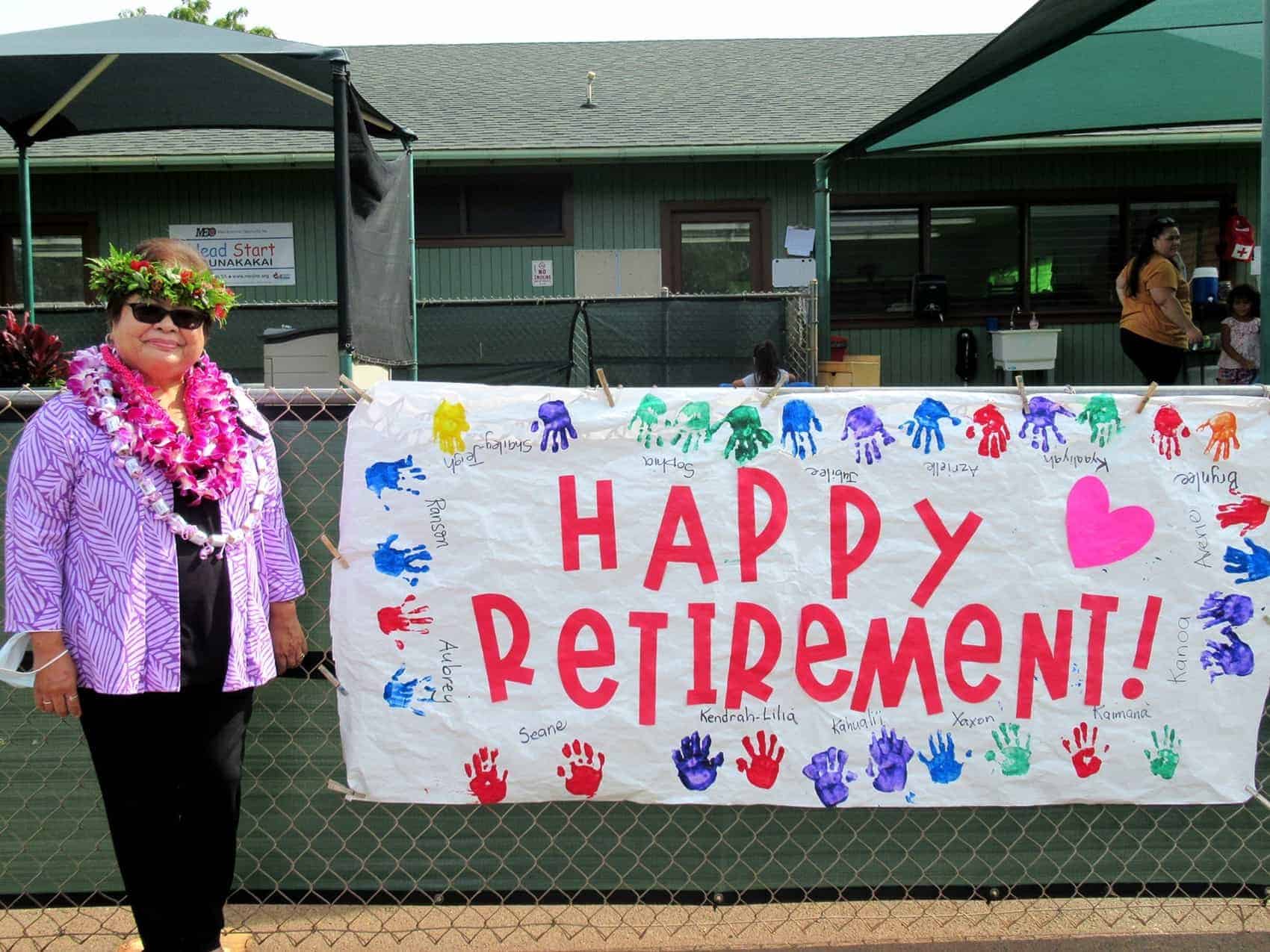 Twelve years ago, Yolanda Reyes joined the Maui Economic Opportunity ‘Ohana, bringing with her a life of experiences at the FBI on the East Coast, the hotel industry, Molokai Ranch and the Molokai rodeo and a deep understanding of the community that nurtured and shaped her.

Through her years leading MEO’s Moloka‘i office, she kept her hand on the pulse of the community, marshalling residents’ help to spruce up and improve MEO facilities, adjusting and adding routes for buses – the only public transit lifeline on the rural island – and helping residents at their most desperate times with food and rent assistance and changing their lives.

Yolanda is retiring today, the day she walked into MEO in 2010. A party was held in her honor with MEO CEO Debbie Cabebe, COO Gay Sibonga, Chief Financial Officer Debbie Lorenzo and Chief Human Resources Officer Cliff Caesar flying to Moloka‘i for the festivities. Three of her children attended the party in-person as well, with one daughter chiming in via FaceTime.

Mahie McPherson will be taking the reins from Yolanda, an appropriate metaphor given Yolanda’s experience on horseback counting cattle at Molokai Ranch.

Yolanda joined MEO after 23 years at the ranch. At the time of her departure, the ranch was changing and downsizing with the end of resort and ranching operations. Her husband told her that if she was not happy at the Ranch that it was OK to resign, which she did. Yolanda spent the ensuing months helping care for her new grandchild and her sister recovering from a kidney transplant and the wedding of a daughter.

She learned from her girlfriend that there was an opening for branch manager at MEO, applied for the position on March 3 and got the job.

“I really think things happen for a reason, the way everything lined up for me,” Yolanda said in an interview March 28. “I was so happy to be in a different kind of position where I could do something for the community.”

Like many who join MEO, Yolanda was not aware of all the details of programs offered by the agency “and helping so many people on the island.” MEO offers residents nearly all the programs available on Maui, including specialized transportation services; Head Start preschool; surplus food distribution; rent, housing and utility assistance; business development classes; and kupuna support.

Yolanda made it a point to adjust bus services to the needs of the community. She established a route from Central Molokai to Kalae. When the Maunaloa Post Office was temporarily closed due to structural and vector control issues last year, she set up bus runs to help West End residents collect their mail from the Hoolehua Post Office.

Early on, she rounded up volunteers to help power wash and paint MEO buildings. But it is her work with the people of Moloka‘i – helping those in need restore their hope – that she is most proud of.

This includes kupuna, who usually don’t ask for help, in jeopardy of getting their lights shut off.

“They say ‘I no like help . . . but somebody told me, so I came to MEO, ’cause they send me notice that they going shut off my electricity,’ ’’ Yolanda said. “I say ‘no, we can help you.’ And they are so grateful.”

And then word spreads.

“They tell everybody ‘go MEO, you can get help,’ ’’ Yolanda said. “ ‘Especially go MEO and get food.’ There is nobody I turn away who needs food. . . . It takes a lot, especially kupuna, to ask for food.”

Not only the kupuna are struggling. Yolanda worries about working middle-class families with children “trying their best” while paying among the highest rates for electricity and gas and other expenses. Many of these families do not qualify for energy assistance, like the Low Income Home Energy Assistance Program or LIHEAP.

“I know these people here, and I know people who wouldn’t want to come and ask for food,” she said. “When they come and ask, I know they mean it.”

Yolanda is “aunty” to many residents of Moloka‘i, where she was born and raised. She is the youngest of seven children from a family in Maunaloa. She toiled in the pineapple fields “and ate the pineapple bugs” with her friends in high school.

After graduating from Molokai High, an FBI recruiter that visited the school convinced her to take the leap and work in Washington, D.C. She did administrative work, noting that her office did the background checks on incoming President Jimmy Carter’s staff.

She also stood at the window of FBI offices watching former President Richard Nixon’s helicopter fly off from the White House after his resignation.

But after five years or so, Yolanda returned with her two sons to Moloka‘i, taking a job at the Moloka‘i Sheraton and doing “everything” from cashiering and night audit to answering phones. Wanting a more stable lifestyle, she took a position at Molokai Ranch as a bookkeeper, which still was employing written ledgers.

In the two decades at the ranch, she worked in the Cattle Department and recalled riding on horseback to count cattle. She also served as secretary for the Molokai rodeo that attracted cowboys from across the state. A takeaway from her days organizing the rodeo was the number of cowboys, who begged to participate and paid a couple hundred dollars to get beaten up by wild animals.

Yolanda has stories to tell in a lifetime well-lived to this point. In retirement, she plans to travel while still physically able. She noted that her husband of 30 years, Lawrence, who passed in December 2020, suffered from leg amputations and sight loss due to diabetes. Her sister also passed.

“I thought to myself, life is too short,” she said.

Other plans include pursuing her hobbies, including sewing, gardening and growing orchids. There’s also lots to do around the house.

“MEO thanks and honors Yolanda for her 12 years representing the agency so well on Moloka‘i,” said MEO Debbie Cabebe. “Lives have been helped and changed by her work. We wish her well in retirement and know that we will still see her around as a volunteer.” 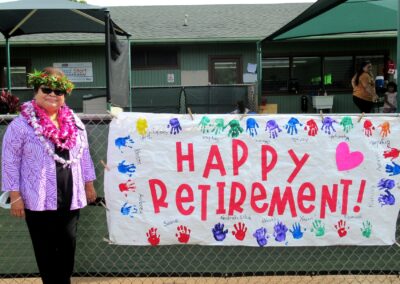 Yolanda Reyes, Moloka‘i Branch Manager for Maui Economic Opportunity, stands next to her retirement sign, outside a party held in her honor at MEO Moloka‘i on March 29. 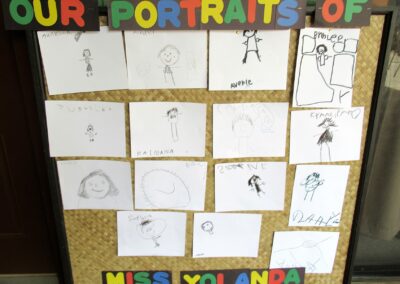 Children in the Head Start preschool on Moloka‘i drew pictures of Yolanda Reyes, who is retiring as MEO Moloka‘i Branch Manager. 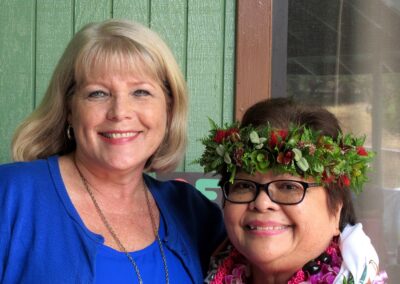 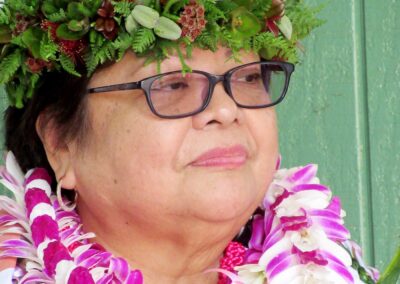 Yolanda Reyes joined MEO in 2010 as Moloka‘i Branch Manager in 2010 after more than 20 years with Molokai Ranch. She watches the festivities at her retirement party. 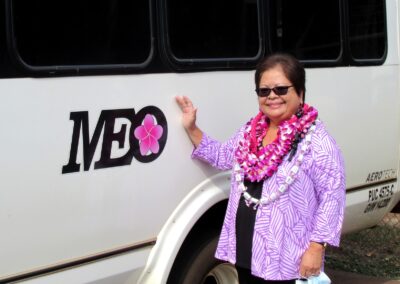 Yolanda Reyes became very familiar with MEO buses during her tenure at MEO. 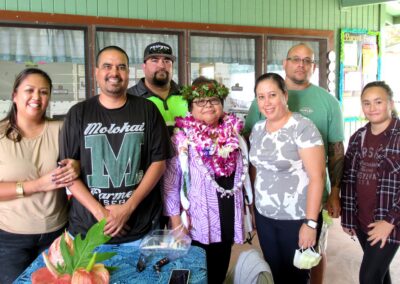 Yolanda Reyes’ family joined her at a retirement party held at MEO. 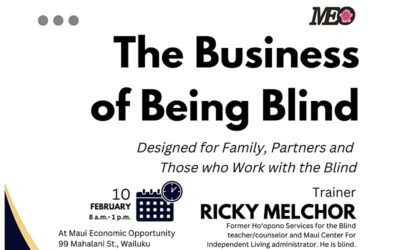 The Business of Being Blind

“The Business of Being Blind,” a workshop for family, friends, co-workers and employers of people who are blind…. 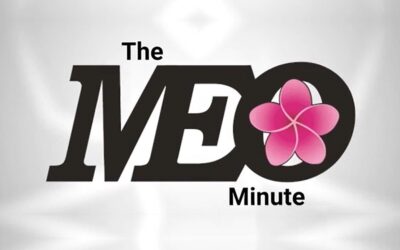 Debbie Cabebe, CEO of Maui Economic Opportunity, Inc., tells us just a few of the things they have planned for 2023…